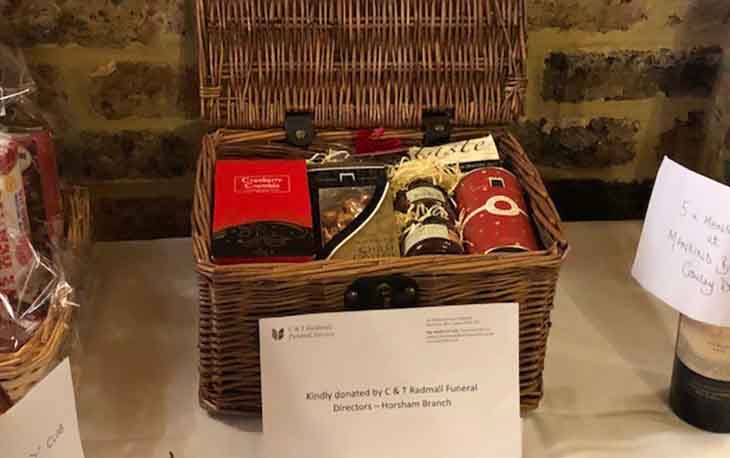 Funeral arranger Jan O’Donnell was in fine voice as part of the Affinity Choir who entertained the masses at a charity event.

Jan said: ‘I organised the raffle as well as singing with the choir who do an immense amount of work during the year for charity, we sing our little hearts out.’

Jan, on behalf of C & T Radmall donated a hamper for the raffle which raised over £485 and counting for Winston’s Wish and the Rockinghorse Children’s Charity.

Rockinghorse is a Brighton-based charity that has been supporting children for over 50 years whose aim is to improve the lives of sick children throughout Sussex.

They are the official fundraising arm of the Royal Alexandra Children’s Hospital (the Alex) raising money for life-saving and cutting-edge medical equipment, while ensuring that children are treated in an environment better suited to their needs. The charity also support the Trevor Mann Baby Unit (TMBU) based at the Royal Sussex County Hospital in Brighton and its sister site, the Special Care Baby Unit (SCBU) at the Princess Royal Hospital in Haywards Heath

Have you found what you are looking for today?

Nothing Stops a Macmillan Coffee Morning!